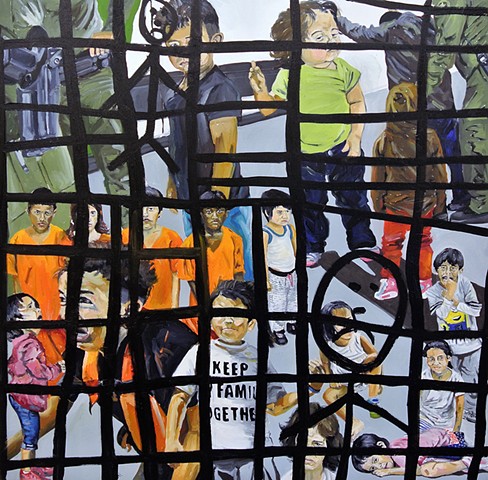 Give me your tired, your poor, Your huddled masses yearning to breathe free, The wretched refuse of your teeming shore. Send these, the homeless, temptest-tost to me, I lift my lamp beside the golden door!
Oil on canvas
48"x48"
< previous

My experience is that I do not neatly fit into white culture or black culture but rather rest in the middle as a bi-racial black man. Exploring this “in between” space has been the major focus of my creative work. For this themed exhibition, my painting uses a snippet from the poem The New Colossus by Emma Lazarus as the title. This poem was written in 1883 and can be found on the Statue of Liberty transforming it into a symbol of immigration. President Kennedy quoted it in his book, A Nation of Immigrants, and President Obama used it in a political speech advocating American immigration policy reform.

The imagery used in the painting is of various children being detained at the border and held in prisons by the US Government. These children and their families are suffering the consequences, and are the victims of, the literal and symbolic wall along the US and Mexican border. During a six-month period in fiscal year 2020 almost two-hundred thousand people have been apprehended and ten percent of those have been unaccompanied children according to US Customs and Border Protection. The children are kept in overcrowded prison camps where thousands of immigrant children have reported sexual assault. The black lines in the foreground are from a drawing done by one of these incarcerated kids. The child has used the drawing to illustrate their experiences.

The New Colossus By Emma Lazarus

Not like the brazen giant of Greek fame, With conquering limbs astride from land to land; Here at our sea-washed, sunset gates shall stand A mighty woman with a torch, whose flame Is the imprisoned lightning, and her name Mother of Exiles. From her beacon-hand Glows world-wide welcome; her mild eyes command The air-bridged harbor that twin cities frame.

"Keep, ancient lands, your storied pomp!" cries she With silent lips. "Give me your tired, your poor, Your huddled masses yearning to breathe free, The wretched refuse of your teeming shore. Send these, the homeless, tempest-tost to me, I lift my lamp beside the golden door!"