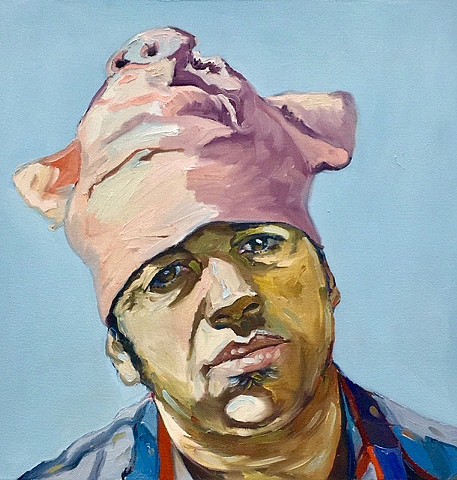 Michael Dixon is an artist working primarily with oil paint and was born in San Diego, California. He received his MFA from the University of Colorado at Boulder in painting, and a BFA from Arizona State University in painting and drawing. Dixon is currently a Full Professor of Art at Albion College. He has been the recipient of numerous awards and grants including a Pollock-Krasner Foundation Grant, Joan Mitchell Foundation Emergency Grant, Puffin Foundation Grant, Blanchard Fellowship, and Phi Beta Kappa Scholar of the Year Award. Dixon has received numerous artist residencies including the Sharpe-Walentas Studio Program, Yaddo, Virginia Center for the Creative Arts, and the Joan Mitchell Center. His work has been shown both nationally and internationally at museums, universities, art centers, alternative spaces, and galleries. Dixon explores the personal, societal, and aesthetic struggles of belonging to both "white" and "black" racial and cultural identities, yet simultaneously belonging fully to neither. The works of artists such as Robert Colescott, Beverly McIver, Michael Ray Charles, Glenn Ligon, and Kerry James Marshall have informed his work.