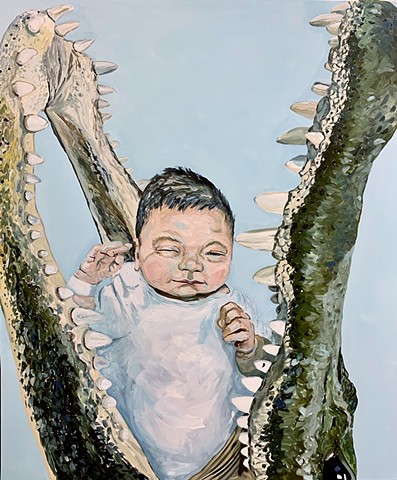 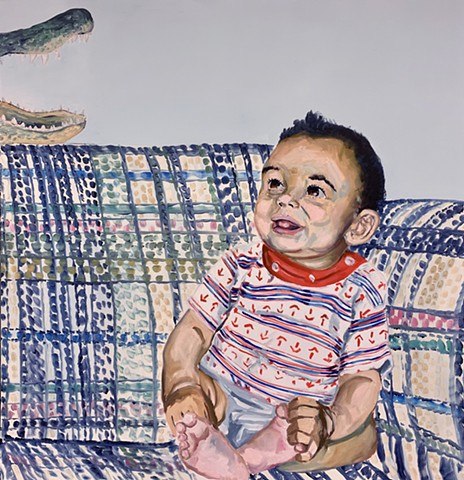 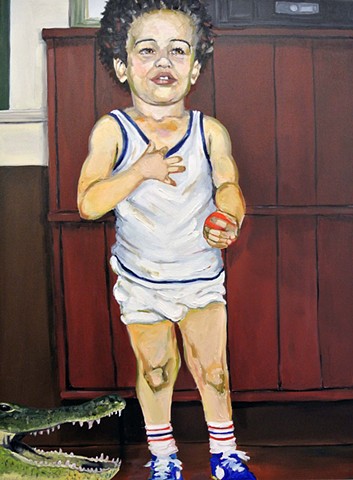 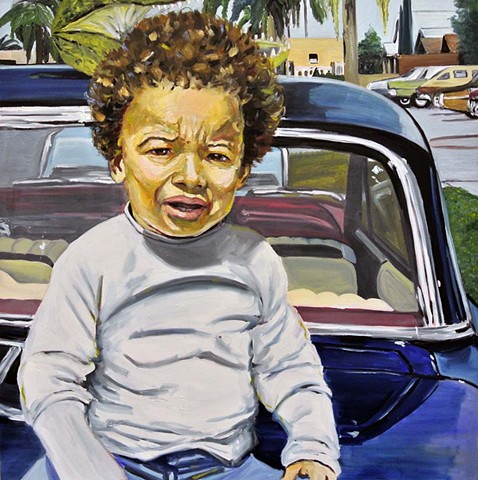 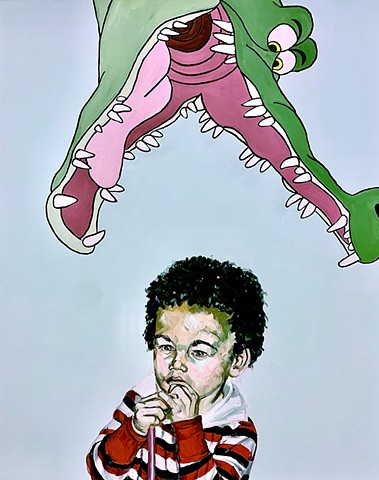 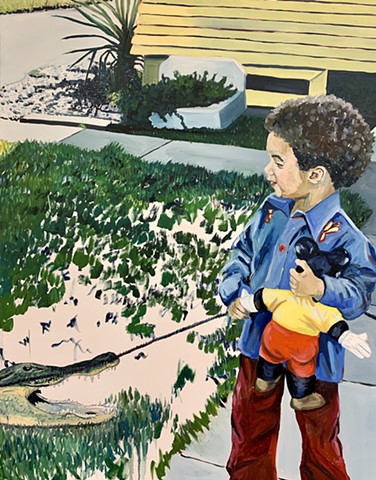 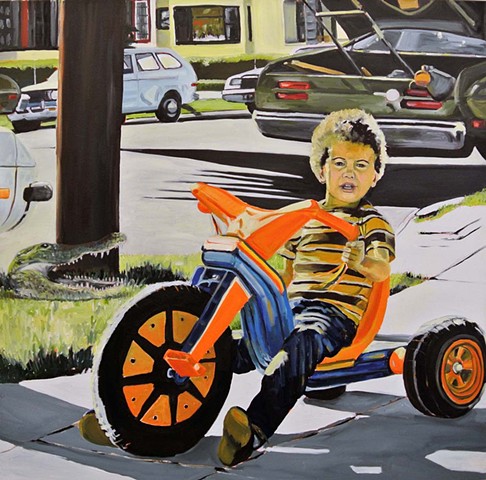 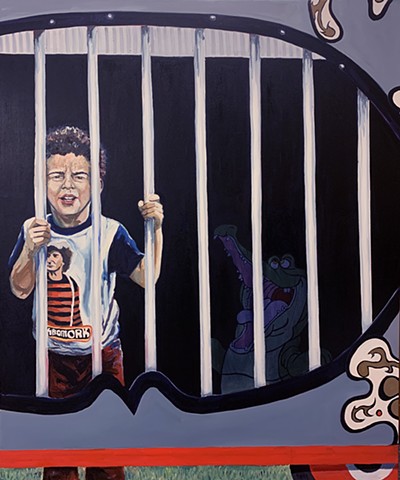 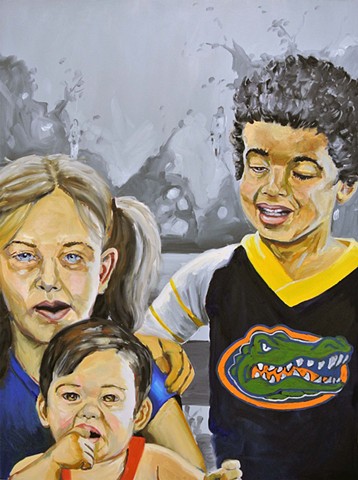 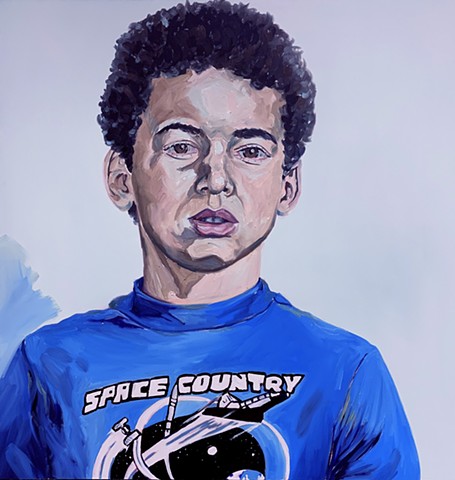 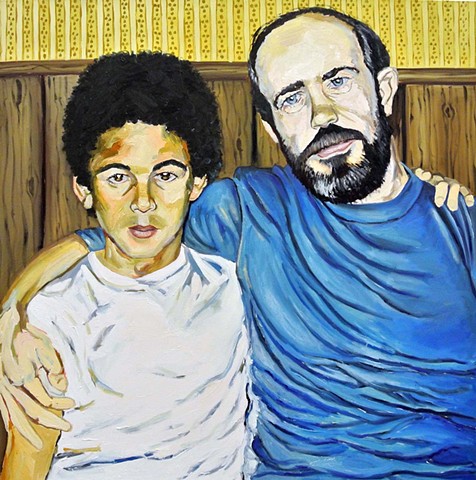 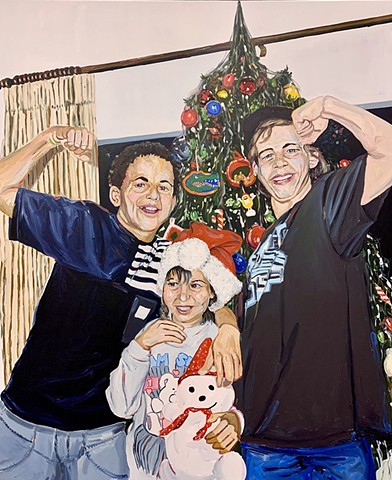 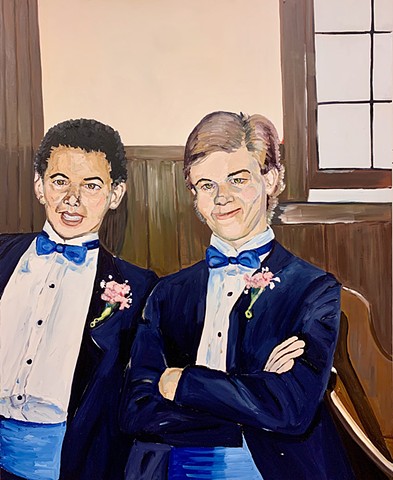 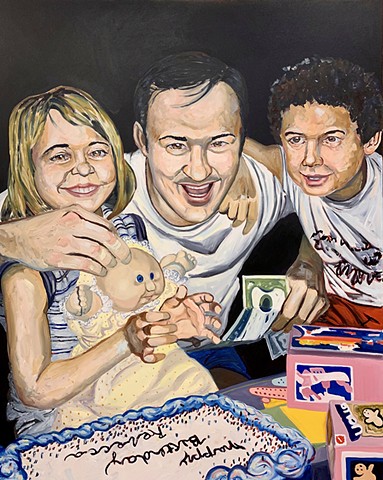 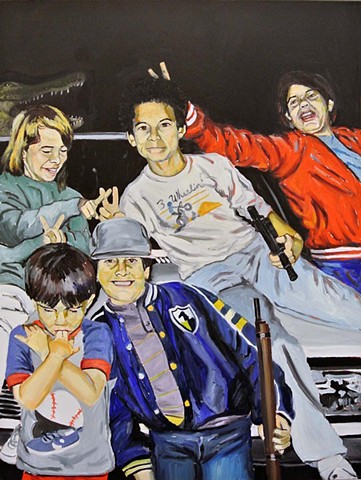 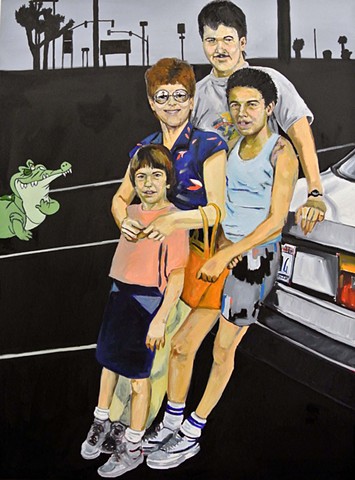 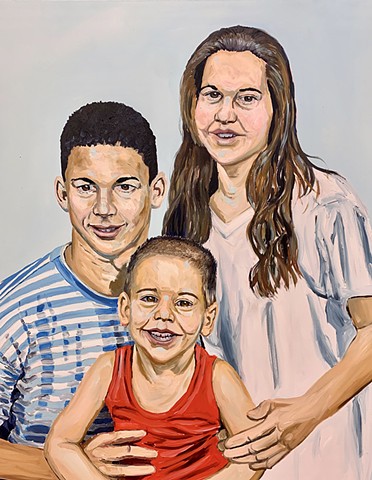 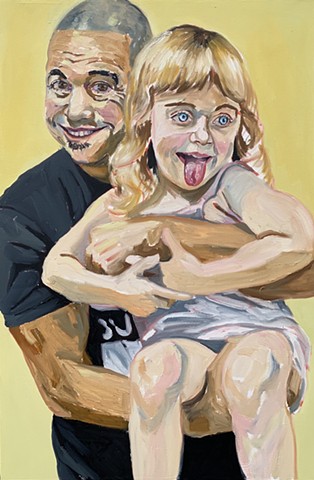 First Black Anything
Oil and collage on canvas
24”x24” 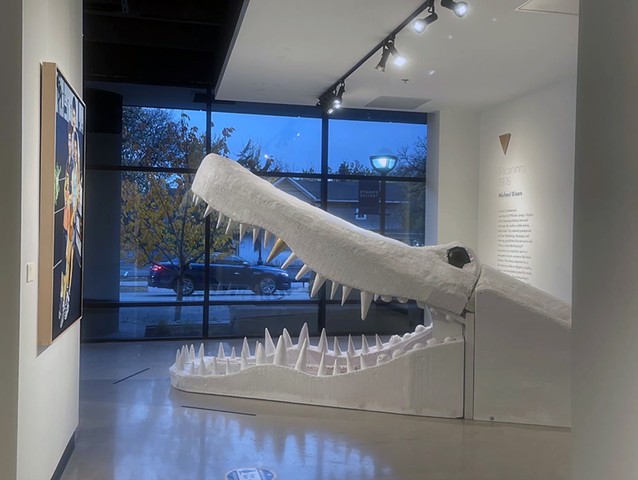 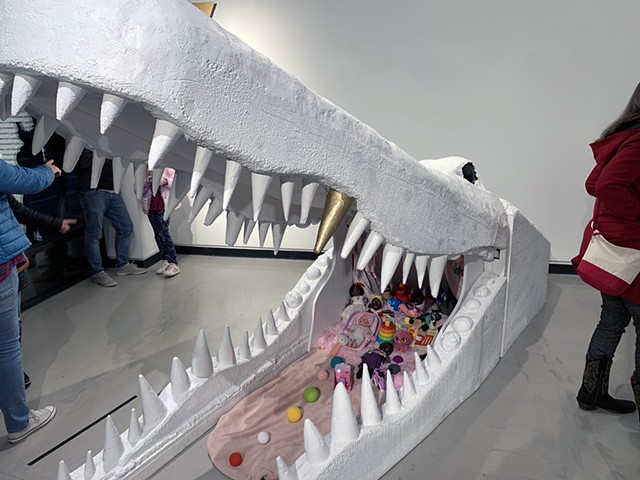 I was born in 1976 nine years after the landmark US Supreme Court decision, Loving v. Virginia, that banned laws prohibiting interracial marriage. My biological mother is white and my biological father is black. I have never met my father. My maternal grandparents are from Hattiesburg, Mississippi, and when my grandfather first met me he said, “Where is that little Picaninny?”

As a result of the way my racial identity is perceived as a light skinned bi-racial black man in America, I often feel out of place, excluded, and alone within majority white and black spaces. What I have experienced is that I do not fit neatly into white culture or black culture but rather rest in the middle. I have conceptualized this “in between” space based upon my experience sand the conversations I have had with other bi-racial people of color over the years. Exploring this “in between” space has been the major focus of my creative work. My newest body of work is titled, Picaninny 1976.

In America, Picaninny (also Pickaninny, Piccaninny, or Pickinninie) is a racial slur referring to a dark-skinned child of African descent. The imagery of the Picaninny is used in a derogatory and racist way to caricature little black children. These children are often unaccompanied by adults and playing outdoors with little to no clothing on. One famous depiction of this Picaninny caricature has the child, or children, playing along a shore while an alligator is waiting or pursuing the child/children. There is often accompanying text that reads, “Gator Bait.” This kind of demeaning imagery was intended to be humorous and was created for, and consumed by, a white audience in the form of postcards, cartoons, games, and many other mass consumed items.

The implications within this imagery was violence to the black body. The black child was likened to a feral animal that was no better than food for a hungry alligator. The objectification of the black body allows for this violence to occur without remorse. The humor makes it funny and natural. There is a through line for me as I think about George Stinney Jr. (1929-1944) who was the youngest person to be executed in America at fourteen by electric chair. Emmitt Till (1941- 1955) was also fourteen when he was violently lynched by adult white men while visiting Mississippi. Tamir Rice (2002-2014) was gunned down and murdered by a police officer at twelve years old while playing outside his home. There are countless other stories to be told and stories that will be told.

The story of my grandfather calling me a Picaninny has made me reflect on my own childhood. I am thinking about my journey of enduring racial traumas enacted through both direct and passive racism. I am thinking about the word Picaninny and what it means. I am reflecting on the implications of this word on black bodies historically. The alligators in my paintings symbolizes both my grandfather and/or systemic racism (conscious/unconscious, active/passive, and direct/indirect). As a person of color, sometimes you see and the experience the racism (conscious, active, and direct) and most often you don’t see it (unconscious, passive, and indirect).