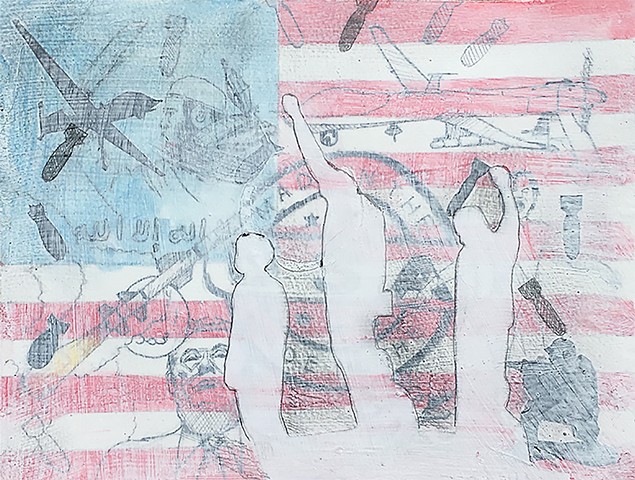 "American Exceptionalism" is the title for my new work on paper and is meant to be satirical. Ian Tyrrell Emeritus Professor of History writes, “In its classic forms, American exceptionalism refers to the special character of the United States as a uniquely free nation based on democratic ideals and personal liberty.” Some of the images I use are bombs, a cruise missile, a toy soldier, Donald Trump, drones, an Isis fighter, an Isis flag, and a fighter jet which all encircle the “Made in America” stamp. Also Phan Thi Kim Phuc, the little girl burned from napalm in the Vietnam War. In this collision of imagery, I am commenting on America’s exceptional role in supporting terror, war, violence, and profiteering on a global scale. In an interview Noam Chomsky talks about the idea of American Exceptionalism by saying, “The doctrine is not really American. Just about every powerful state in history has advanced similar claims, typically leaving a trail of blood and disaster.” My hope is found in the image that sits in the foreground. It is Gold medallist Tommie Smith and bronze medalist John Carlos showing the Black Power salute on the podium after the 200 m race at the 1968 Summer Olympics. This is a tremendous act of courage in protest against American racism. I have left these figures blank to allow for others to stand up and put themselves on those pedestals in protest.